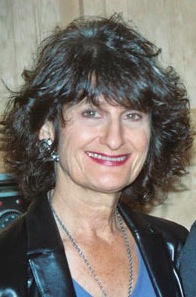 The following is a summary of my organizational work, published in the Religious Action Center of Reform Judaism's online series, "50 Faces of Justice" (2013).

Evely Laser Shlensky, a former chair of the Commission on Social Action and a life-long Jewish activist, grew up in a home steeped in Jewish life. From an early age, she learned from her father that “Judaism is not our religion, it’s our way of life.” Evely recalls that her father’s main motivation to make money in his business was to support his “tzedakah habit.”

In Evely’s household social justice and world affairs were inextricably linked with Jewish practices, and she remembers always feeling deeply religious from an early age. She was the only person she knew who actually liked Sunday school, a fact that logically led to a leadership in her congregation’s Temple Youth Group as the Religious and Cultural Vice President.

As she grew into adulthood she began to understand that to truly embrace her Judaism she needed to take her religion out of the synagogue. “To be a committed Jew, I had to care about the shape of society and bring my Jewish values into the streets.” And, as she became more and more engaged in social justice campaigns, she found that acting out her Jewish values in the world in the form of both gimilut chasadim and the pursuit of justice through advocacy was her true religious calling.

While Evely has worked on countless social justice campaigns over her lifetime, from hunger to the plight of Ethiopian Jewry, for such a campaign to both be meaningful and successful they seem to follow a distinct pattern; they intersect religiously, politically and personally. The first of these campaigns that caught her attention was the sanctuary movement in the 1980s. This was a specifically religious response to the situation of refugees fleeing violence and war in Central America – primarily in El Salvador and Guatemala. The sanctuary movement linked refugees with no resources with congregations who could help and house them. More than any issue before, this campaign was the perfect confluence of the personal, political and religious. Our Jewish texts and history, both ancient and modern, are clear on our responsibility to help the stranger in our midst, the political implications of U.S. foreign policy in Central America were strong, and when she housed a Guatemalan refugee in her home, she understood the personal ramifications of this issue in her core. During this time, she got to know this woman who had survived rape and war and who had seen her husband killed for his participation in a labor union. While many felt that she and her colleagues were breaking the law by housing refugees, Evely felt instead that they were observing international law.

Evely’s work in worker justice issues has shown her so clearly the importance of generational links between seemingly diverse groups of people. These links have made the Jewish imperative to help the stranger more compelling and immediate to her. As the co-chair of the Los Angeles Jewish Commission on Sweatshops, she helped coordinate an event during which Latino workers came together with members of the Jewish community for a “Dignity Seder.” During this event, a survivor of the Triangle Shirtwaist Fire spoke to the attendees; Evely remembers looking at the young Latina women nodding vigorously, seeing their own experiences in her story.

Although Evely has not always belonged to “social justice synagogues,” she has found her involvement in the Commission on Social Action to be a national community of shared values. “It was a relief and delight to learn from such people,” she said. “It’s not that we didn’t argue, but there was a sense that we had the same perspective on the need for a religious body making decisions informed by Jewish texts and history.”

It was the strength of this community that convinced her to want to pursue a leadership role and so she took her place as the Commission’s chair. She remembers with pride that the social justice advocate in the synagogue went from a marginalized role to a central player over her tenure. At the time, she wrote: “More often than not, the work of tikkun olam, repair of our world, is relegated to a committee rather than held as a central congregational imperative. And at times it seems we’ve traded the ‘holiness track,’ with its attendant obligatory acts, for the ‘spirituality track,’ focused on religious feeling. Yet what passes for ‘religious living’ can become an exercise in self-absorption if we address God but not the human condition.”

Reflecting on this issue now, she says: “We needed to make an affirmative response to creating a more holistic Judaism that would understand the work of social justice as a primarily religious act.” It is clear, looking around the Reform Movement today, that she accomplished that goal.

The following is from a 2019 address at the URJ Biennial by Liz Dunst, Past Chairperson of the Commission on Social Action of Reform Judaism:

I stand on the shoulders of women before me.... The woman who taught me the "how" of making change is, and continues to be Evely Laser Shlensky -- one of the most outstanding Chairs of the Commission on Social Action. Still active on the Commission, and a trusted advisor to all of the Chairs ( including me) who succeeded her. It is Evely who teaches that to make change you have to be “present” and in ongoing relationship with the vulnerable populations that you are working with. You need to understand what they say they need, not simply rely on what you think they need. She did this as the foundation of how she pursued social justice, whether it was accompanying 4,500 Salvadorian refugees from a Honduran refugee camp to El Salvador, to meeting with Refusenicks in Russia, or going to Billings Montana to celebrate the city's stand against anti-semitism and racism. ​